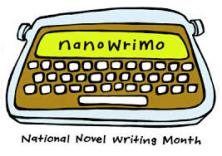 What is NaNoWriMo TGIO you ask? For me that is today, December 1, because on this day Nationonal Novel Writing Month Thank God It’s Over is officially here.  My goal this year participating in NaNo wasn’t to write 50,000 words (I knew that would be nearly impossible with me still recovering from elbow surgery—and believe me there were days I just wanted to quit—but also because of writer club duties as president). My goal was to get back to writing consistently, get the words, the story flowing in my mind. I may have started NaNo as the proverbial turtle, but in the end I was hopping and running like the rabbit.

I worked on a middle-grade story that has a ten-year-old boy, Niall, the grandson of the Tuatha Dragon Clan healer/caretaker dealing with leaving his home in Dublin, Ireland and staying with a grandfather he never knew about, getting mixed up with a school bully, and finding out about Ireland’s greatest secret—dragons!

At TGIO day, I have just over 37,500 words written. I am probably half-way through telling this story. Of course, then I’ll need to edit, but Hurray!! For those of you who have read The Keepers of Éire, Niall is mentioned in one sentence—when his grandfather, Timothy, tells the dragon clan leader, Sean he’ll have Niall help care for the injured Grayson. That one sentence—and Jake R. and his class of fourth graders in Dublin, CA, inspired this story.

Sharing a quest to see America

Building and exploring new worlds one cobble and inn at a time.

Memoirs and writing tips with a touch of humor